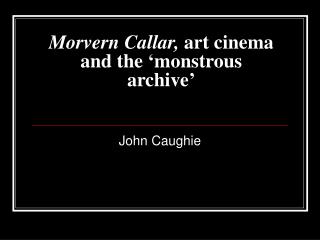 Morvern Callar, art cinema and the ‘monstrous archive’. John Caughie. Alasdair Gray, Unlikely Stories Mostly (1983). ‘Work as is you were living in the early days of a better nation.’. Gilles Deleuze, Cinema II: The Time-Image (1985).

Welcome to The Bedford Archive

Archiving - . david nathan eldp training workshop march 2010. archiving: what do you think of?. what is a language

An Introduction To Heritrix - Internet archive. an introduction to heritrix. web collection. since 1996. over 4x1010 ...

French Cinema - . past and present. outline. introduction part i. the birth of cinema part ii. the classics part iii. the

DANISH FILM 1896 – 2004 - Palle schantz lauridsen dept. of nordic studies and linguistics what is the lecture about?

The World of Cinema and Theatre - . lesson 2. topic: watching films objectives: . to revise and enrich students’