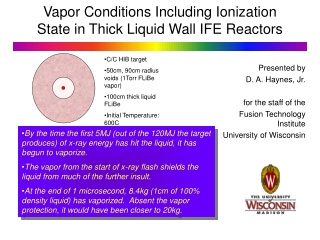 Liquid-Vapor Phase Equilibrium - . distillations will be performed in hood. purpose. to study the equilibrium of a binary

HEIGHTS Integrated Models for Liquid Walls in IFE - . a. hassanein and heights team. presented at the aries meeting april