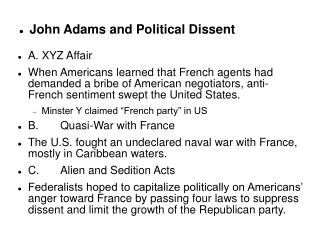 John Adams and Political Dissent. A. XYZ Affair When Americans learned that French agents had demanded a bribe of American negotiators, anti-French sentiment swept the United States. Minster Y claimed “French party” in US B. Quasi-War with France