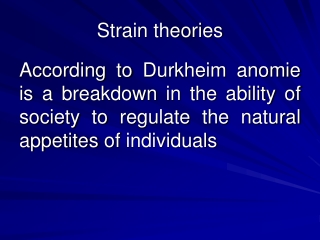 Strain theories. According to Durkheim anomie is a breakdown in the ability of society to regulate the natural appetites of individuals. Robert K. Merton.

Sociological Theories: The Anomie Strain Theory Part I - . society is an underachiever. we live in a stratified society.

Shearing Strain - . a cubic element subjected to a shear stress will deform into a rhomboid. the corresponding shear

Strain I - . recall: pressure and volume change. the 3d stresses are equal in magnitude in all directions (as radii of