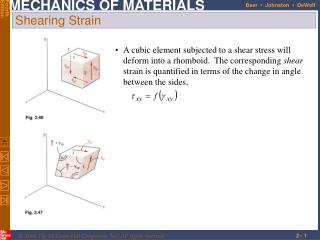 Shearing Strain. A cubic element subjected to a shear stress will deform into a rhomboid. The corresponding shear strain is quantified in terms of the change in angle between the sides,. 2 - 1. Find:. Initial Plate. Deformed Plate. Uses of Hydraulic Shearing Machine - There are distinct differences between shear and ordinary direct machining of tools,