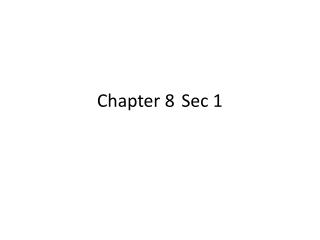 Chapter 8 Sec 1. Myanmar. Was once called Burma and is about the size of Texas. They have two main rivers the Irrawady and the Salween. About 2/3 are farmers and they do not have modern technology. Chapter 8 SEC 1 - Geometric vectors. chapter 8 sec 1. vector. a vector is a quantity that has both direction and

Chapter 8 sec. 1 - . what is a monomial and how do i multiply them?. a monomial is a number, a variable or a product

Chapter 18 sec 1 - . compromise of 1850 as a result of the gold rush california's population exploded and decided to

Chapter 3 sec 1 - . geography of mesopotamia. the tigris and euphrates rivers are in southwest asia. located in iraq.

Chapter 4 Sec 1 Vocabulary - . inauguration a ceremony in which the president takes the oath of office. precedent an