The Quest and The Hero’s Journey - PowerPoint PPT Presentation 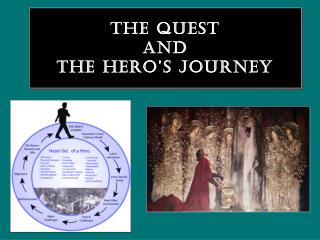 The Quest and The Hero’s Journey The Quest and The Hero’s Journey. ARCHETYPE: A UNIVERSAL SYMBOL. ARCHETYPE: A pattern or prototype, such as a type of story, character, or common theme that is repeated in literature and reflective of the human experience.

The Quest and The Hero’s Journey

An Archetypal Story - The hero's journey. an archetypal story. archetype: a pattern, such as a type of character or type

The Hero’s Journey - . hero myths. hero myths contain the goals and virtues of an entire nation or culture; they are

Welcome to Mayflower - . open to god open to all. lenten liturgy. lent is a journey with jesus toward jerusalem, toward

INTRO TO ASSIGNMENT (DAY 1) - . an inspirational moment in time: the collaborative journey through the production process

Mythic Structure - . based on joseph campbell’s the hero with a thousand faces and chris vogler’s the writer’s

Achilles as a Hero - . some definitions of &quot;hero&quot; lord raglan's hero pattern the hero pattern applied