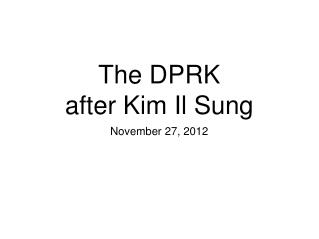 The DPRK after Kim Il Sung. November 27, 2012. Review. When did the ROK become a truly democratic country? (When did it have a peaceful transfer of power?) How did Kim Daejung finally become president? Did Korea ’ s policy toward North Korea change under Kim Daejung and Roh Moohyun? README - . lecture notes will be animated by clicks. each click will indicate pause for audience to observe slide. on

Three Branches of Government - . sung to “the wheels on the bus ” chords: c and g. the three branches of government,

Unit 5 The Tapestry of Friendship - . i. introduction. do you keep in touch with your childhood friends? what do you keep

Children of North Korea - Growing up in the world's most reclusive

Colonisation &amp; Decolonisation - . the end of empires and creation of a political vacuum . fact: migration