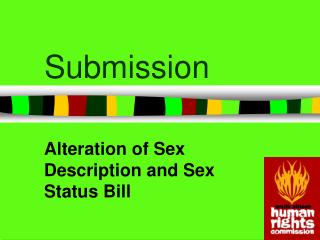 Submission. Alteration of Sex Description and Sex Status Bill. Introduction. SAHRC welcomes the Bill SAHRC has dealt with a small number of complaints Supports the Bill based on principles of human dignity, achievement of equality and the advancement of human rights and freedoms. Submission - . www.kevinhinckley.com. school notes from alabama. 1. my son is under a doctor's care and should

SUBMISSION 2 - . library research. just to remind everyone. submission 1. submission one – 10%. paper one consists of 2

Proposal Submission - . how many sponsors are there? that’s how many methods of submission there are!. from concept to