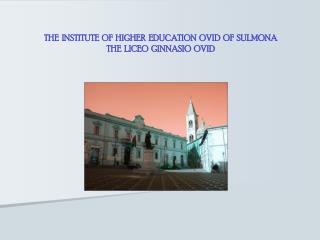 THE INSTITUTE OF HIGHER EDUCATION OVID OF SULMONA THE LICEO GINNASIO OVID. 500 STUDENTS AND 40 TEACHERS TO BUILD OUR FUTURE! Essentials of OVID - . using uml based notation to capture system requirements and design. overview of socio-cognitive