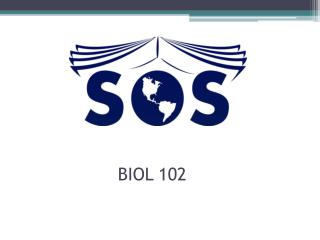 BIOL 102. Example Question. Which of the following statements is TRUE? Atomic mass is the same as weight In polar covalent bonds, electrons are shared equally between the two atoms In a reduction reaction, the molecule becomes more negative A pH of 5 is 50 times greater than a pH of 4 BIOL 102 - Digestive, circulatory and nervous systems. observe the slide of frog duodenum and prepare a lab drawing with

BIOL 102 review COMMUNICATIONS - . and apply to what happens in relationships within and between

BIOL 102 HUMANS in NATURE - . spring 2010 neil greenberg. o. determinism. a belief that everything has a cause, and that

Stochasticity in Community Ecology BIOL 548B 102 - . why are we here? stochasticity (randomness, chance) is a concept

BIOL 582 - . lecture set 21 one- way manova, part i. so far we have learned two things about multivariate data: that