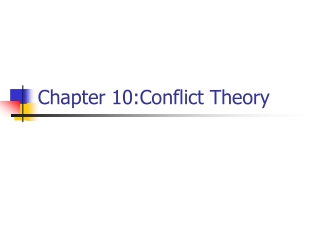 Conflict in Teams - . chapter 7. is all conflict bad? what happens when there is not enough conflict?. functional (task)

CHAPTER 9 - . resolving conflicts with others. the meaning of conflict. a conflict is a situation in which two or more

Managing Conflict and Negotiations - Chapter 11. managing conflict and negotiations. a contemporary perspective on

The Nature of Conflict - . chapter one. conflict. fact of human life constructive conflict is an essential set of

CHAPTER 17: MANAGING CONFLICT AND STRESS - . when you have completed this chapter, you will be able to: understand the

CHAPTER EIGHT : Managing Conflict in the Small Group - . what is conflict?. an expressed struggle between at least two

CRIMINOLOGY - . chapter 9. the relativist definition of crime and deviance the imposition of the deviant label the

Chapter 9 Review - . communication and conflict. conflict and communication. what is an example of an image conflict?

Managing Conflict and Negotiating - . chapter eleven. after reading the material in this chapter, you should be able to:.