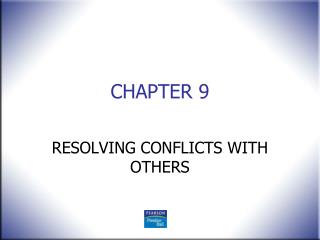 CHAPTER 9. RESOLVING CONFLICTS WITH OTHERS. THE MEANING OF CONFLICT. A conflict is a situation in which two or more goals, or events are incompatible or mutually exclusive. (You are forced to make a choice.) A conflict is also a strife, quarrel, or battle.

Working with others - . types of people. working in teams is not always easy. we may have to work with many different

Resolving Conflicts - . essential question. how can you resolve conflicts within your relationships? . lesson

Lesson 5. Resolving Conflicts - . november , 2013. dealing with conflicts at school. what are conflicts ? conflicts are

Being With Others - . chapter 11: forming relationships in young and middle adulthood human development: a life-span view

Tips on Resolving Conflicts - . crs for students. how to approach a conflict? relax-stop arguing, name calling,

Dealing with Conflicts - . a useful p.u.r.p.l.e. people skill!. what is a conflict?. a conflict is a disagreement between

Resolving Conflicts - . in this lesson, you will learn about… why conflicts occur. what to do if you are not getting

Understanding and resolving conflicts between winter flounder and dredging - . thomas m. grothues institute of marine and