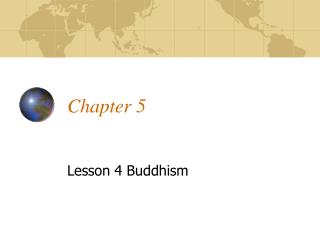 Chapter 5. Lesson 4 Buddhism. Who was the Buddha?. According to Buddihist tradition, the man who became the Buddha was born during 6 th Century B.C. In the 4 th Century B.C. it spread to India, and in the 3 rd Emperor Ashoka spread Buddhism throughout South Asia. Who Was the Buddha? Cont.