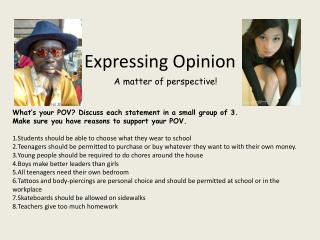 Expressing Opinion. A matter of perspective! . What’s your POV? Discuss each statement in a small group of 3. Make sure you have reasons to support your POV. Students should be able to choose what they wear to school Expressing an Opinion - . politely. indirect opinions. if someone did not ask for your opinion if you do not know the

Series of Paragraphs expressing an Opinion - . olc. what is a s.o.p?. a series of paragraphs, is a way of expressing your

Conversation Lesson 12: Expressing Your Opinion - . jack: hey, janet, do you know where tony is? i haven’t seen him all

Expressing Preferences - . would rather + bare infinitive + than i’d rather work in an office than outdoors. prefer +

Expressing Emotions - . emotion. psychologists define it as a reaction to a situation that involves a person’s mind,

EXPRESSING REGRET - Regret. expressing regret. regret = something you did or did n’t do note: didn’t = past of do.

Expressing Contrast - . although, in spite of, but, however…. connectors of contrast. although / though / even

Expressing Contrast - . although, in spite of, but, however…. connectors of contrast. although / though / even though