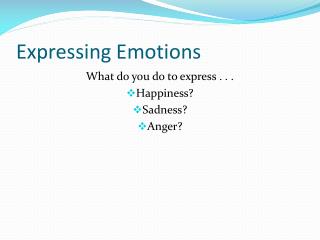 Expressing Emotions. What do you do to express . . . Happiness? Sadness? Anger?. Haiku. 5-7-5. Haikus are easy,  But sometimes they don't make sense.  Refrigerator . Write a silly haiku . . . Just get it out of your system . Terminology . Expressing Emotions - . emotion. psychologists define it as a reaction to a situation that involves a person’s mind,

Expressing Your Emotions - . ch. 1 section 3. warm-up activity. myth : it is always healthy to “let your feelings

GUIDELINES FOR EXPRESSING EMOTIONS - . the next slides will discuss 7 guidelines for expressing emotions. by: erick and

Lesson 10 : Expressing Emotions &amp; Managing Stress - . why it’s important?: stress is linked to many of the ten

Expressing Preferences - . would rather + bare infinitive + than i’d rather work in an office than outdoors. prefer +

EXPRESSING REGRET - Regret. expressing regret. regret = something you did or did n’t do note: didn’t = past of do.