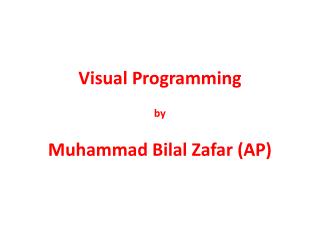 Visual Programming by Muhammad Bilal Zafar (AP). COURSE INTRODUCTION. Visual Programming. Programming in which more than one dimensions is used to convey semantics. Diagrams, icons or demonstration of actions performed by graphical objects. By Ahmad Bilal - Digital logic &amp; design. by ahmad bilal. 2. zaroori ailan. quiz will be held in next class topic

By Imaad Zafar - The element of silver. by imaad zafar. what is

Visual Rhetoric - . taylor montgomery you can be a hero after you die. make the organ donor pledge. ap language letitia

Introduction to Visual Rhetoric - . theory, practice, and method ap english 11 2006. so what? why care? or: but the