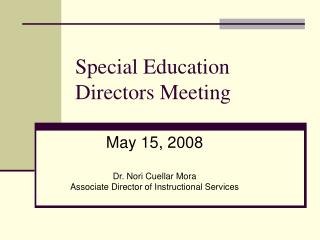 Board of Directors: FIDUCIARY DUTIES - . (or, how to avoid legal trouble). a board’s role. governing body for its

Strategy Meeting - . grady health system board of directors nov. 1, 2010. threading the needle. what we don’t know:

Maryland’s Children in Special Education with Emotional Disturbance: An Overview of Data and Current Outcomes - Meeting