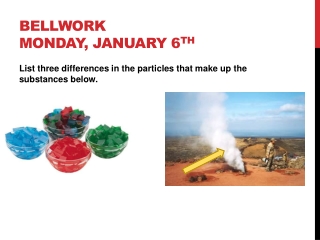 Bellwork Monday, January 6 th. List three differences in the particles that make up the substances below. CHEMISTRY Unit 5.1 THE STATES OF MATTER and gas laws. Kinetic theory of gases - valid only at extremely low density. Bellwork Monday January 12, 2015 - . what are the two types of digestion? give an example of each type of digestion.

Week Beginning Monday 6 th January 2014 - . the baptism of the lord. “ then jesus came from galilee to the jordan to be

Monday, January 7 th - . bell-ringer : please locate your assigned seat using one of the sheets on the front tables. pick

Monday, January 14 th - Today is dress up your pet day!. monday, january 14 th. 2 minutes in your gams to get organized.

Monday , January 30 th - . please get a new warm up and complete today’s please write down the warm up. warm up. how

Monday 4 th January - . an inspector calls s.c.: i can identify the gaps in my knowledge of the text we can show mrs

Monday, January 27 th - . bell work : please pick up the daily handout from the front table. log-on to your computer and

Monday, January 14 th - Today is dress up your pet day!. monday, january 14 th. questions on the last 10 pages of the

Behavior of Gases - . chapter 10 &amp; 12. pressure. what is pressure? a force exerted by a gas over a given area

Behavior of Gases - . chapter 10 &amp; 12. laws versus theories. scientific law a law is a statement that describes