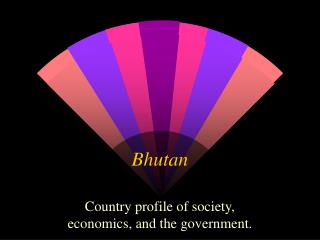 Bhutan Country profile of society, economics, and the government. Introduction Shares a history of influence by Tibet, China, India, and an interlude of British colonial guidance. Ruled by hereditary monarchs. Legal system based on Buddhist law and English common law

Bhutan - . created by: chloe marie. geography. area is 47,000 square kilometers about half the size of indiana is

Bhutan Trip - Pack your bags and get ready to witness the divine beauty of the bhutan. the land where heaven meets

BHUTAN TOURS - The tour programme of extreme adventure is one of our most interesting and fascinating tours of all. it