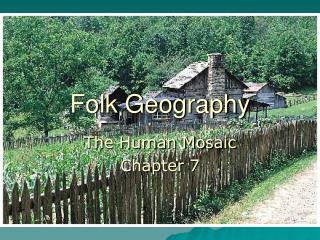 Pop &amp; Folk Geography - . human geography mr. fitzgerald. what is culture?. culture can be defined as all the

Folk Healing - . objectives: identify the differences between religion and spirituality discuss the effects religion has

Folk Culture - . around the world. cultural integration in folk geography. interaction between folk and popular cultures

Folk-dance - . the dance house movement is 40 years old in hungary. the first was in 1972 in budapest. in a dance house

Folk Tales - . stories of a people. folk tales are stories that teach a lesson and are passed down orally to each