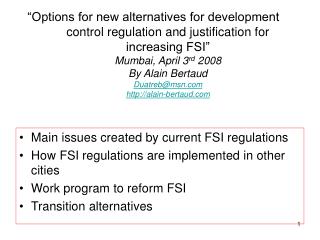 HOW ARE CITIES CREATED? - . intro to designing your city. people move to be near water. having water nearby means: -

Introduction to FSI Activities - . regional seminar on capital adequacy and risk-based supervision for supervisors in

FSI and Mw(qqqq) - . … an alternative approach … pfcut and pcut update from from pisa. marie legendre, djamel

IRB Board Education Session 6 How Consent Regulations are Implemented in INSPIR - . mary banks director, office of the

OTHER REGULATIONS IN INHALATION TOXICOLOGY - . yves alarie, ph.d professor emeritus u niversity of pittsburgh,usa. a.