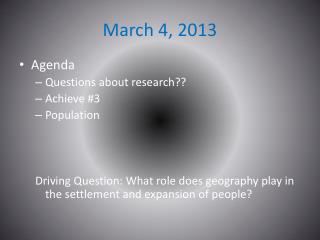 March 4, 2013. Agenda Questions about research?? Achieve #3 Population Driving Question: What role does geography play in the settlement and expansion of people?. Population. Social Studies Core-9. . Where is Everyone?. On your map, color in the places you believe people are living. March 4, 2013 - Copy the root word, definition, and examples on your chart. then see if you can think of some additional

Monday, March 4, 2013 - Learning target : i can watch the news; meet a deadline for a major project. turn in multi-genre

Monday, March 4, 2013 - . take out your bell work from last week. put your biography on your desk if you revised it.

Caught ’ ya! for March 4, 2013 - . its vivian virtuous whispered isabelle to her freinds. i remember her from last year

March 2013 - Global cities. influence &amp; change to/from asian community. “what is a city, but the people?”

March 2013 - . city of zagreb city office for economy, labour and entrepreneurship. structure of the city government.

March 2013 - . health care reform. note to shrm members. this sample presentation is a broad overview of the major

March 2013 - . a child with a visual impairment, including blindness ecea disability category, definition and