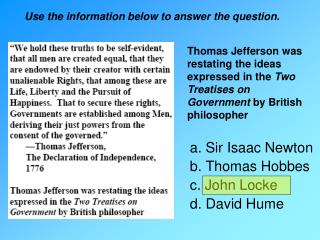 a. Sir Isaac Newton b. Thomas Hobbes c. John Locke d. David Hume. Use the information below to answer the question. Thomas Jefferson was restating the ideas expressed in the Two Treatises on Government by British philosopher. Thomas Hobbes and John Locke - . limited government- gov. does not have absolute authority.  state of nature- how humans

Sir Isaac Newton - . was born 4 january 1643. in the country woolsthorpe ,. newton gave us a lot of discoveries. the most

Sir Isaac Newton - . background information. born in december 23, 1642 he was a premature baby and wasn’t expected to