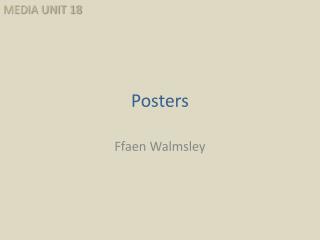 Posters - . how to make them. how to present them. to present data. when words are inefficient: surgeon’s end loop knot

Posters - . how to make them. how to present them. first questions to ask yourself:. what's your content? create a topic

Posters - . professor n. sartorius, md, phd, geneva . purposes of a poster . to give a message - usually one, but not

posters - . to do or not to do… that’s not quite the right question, but you’ll get the point later. general rules

Posters - . my definition of a poster: “poster is a factor of print media, usually used to advertise a film”.

Posters - . posters are an neglected species in programme committees: the poster section is the waste bucket for

Posters - . 海报. do these people( 人们） have good habits?. 习惯. go to bed too late. eat too much before

POSTERS - . a strategy for post-method pedagogy. julia cardona mack. history of the posters at unc. how to formalize

Making Posters - . practical, scientific and artistic. how big should a poster be?. as small as it can cheaper faster (to