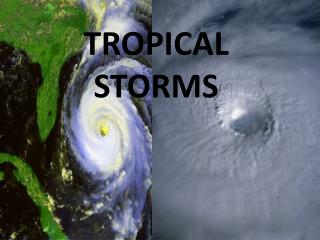 TROPICAL STORMS. Starter In pairs, think of 5 questions beginning with the letter ‘W’ that you could ask about this image. Lesson 1 and 2 What are tropical storms?. Lesson objectives To understand what tropical storms are and how they are formed. Success Criteria Tropical Storms - . what is a tropical storm?. a severe depression. wind speeds reach over 60 km/h but can reach over 200

Tropical Storms [Date] Today I will: - Know the location and features of tropical storms - Geography environmental

Changes in extra-tropical and tropical storms in the 21st century - . professor lennart bengtsson essc, university of

Storms - By andre . storms . tornadoes . http:// www.youtube.com/watch?v=psajnlbh7ca. what is a tornado? . prior

Storms - . storms. really bad weather dangerous can cause a lot of damage. thunderstorms. f orm when there is a

Storms - . 4.5. storms. storm - a violent disturbance in the atmosphere. all year round, most precipitation begins in the