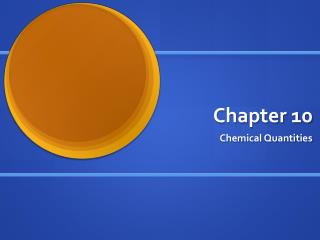 Chapter 10. Chemical Quantities. Measuring Matter. Matter can be measured by 3 methods By count the number of CDs you have The number of atoms or molecules you have By mass or weight You buy vegetables by the pound The mass(g) of a compound or element you have By volume