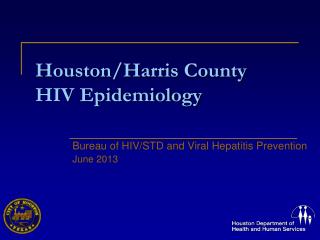 Houston/Harris County HIV Epidemiology. Bureau of HIV/STD and Viral Hepatitis Prevention June 2013. Definition of epidemiology. Epidemiology- the study of the distribution (who, what, where, when) and determinants (why, how) of health-related states in specified populations