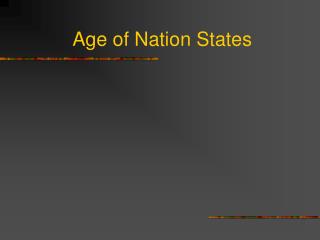 Age of Nation States. Origins of Nationalism. (This slide is review !!) What is a Nation? not a state not a political entity Usually thought of as combining: common history -common language [problem in Eastern Europe] common religion self-awareness of group status. The Crimean War. Age of Nation States - . origins of nationalism. (this slide is review !!) what is a nation? not a state not a political

The Age of Nation States - . chapter 23 eqs : how did unification occur in italy and germany in the late 19 th century?

Nation States - . humans have always partitioned space to separate themselves from other human groups. this is similar to

Nation States - . nations and states. these two terms are not synonymous. “the state” refers to an area bound by

States of the nation - . andy mcnicoll communications officer, drugscope. what we’ll cover. the drugs landscape the

Rise of Nation States - . feudal monarchs increased their power by gaining the support of townspeople. growth of a money

Competing Nation-States? - . what are the characteristics of a nation-state?. is it possible to reconcile ‘feudal

The Age of Nation Building - . politics, diplomacy and war. louis napoleon as president. winning support after his

RISE OF EUROPEAN NATION-STATES - . the growth of monarchies. england. invaded by angles and saxons in the 5 th century

The Development of Nation-States - . europe in the 14 th and 15 th centuries. during most of the feudal era, monarchs had

Medieval Europe: Rise of Nation States - . england. had been part of the roman empire population was a mix of angles,

Absolutism &amp; Nation States - . how did the values of absolute monarchs differ from country to country?. 1.