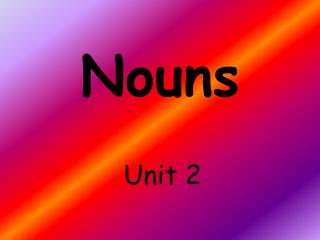 Nouns, Nouns, Nouns! - . everything you ever wanted to know about nouns. recognize a noun when you see one. george!

nouns - . definition. a noun is a word or word group that is used to name a person, a place, a thing, or an idea. people.

NOUNS - . a noun is…. a word that names a person, place, thing, or idea. examples. in 6 th grade, we will be studying

Nouns - . nouns. definition: a noun is the name of a person, place, or thing: tom drove the car into the garage. an owl

NOUNS - . by mrs.. h. nouns are words that name:. people. the put the books on the shelf . places. my family visited the

Nouns - . copy each sentence on your paper. underline the nouns in each sentence. there is more than one noun in each

Nouns - . objective i-1 identify correct noun forms (singular and plural). noun. a noun is a word that names something:

nouns - . to learn more about nouns, click on the buttons on the next page. home. by patricia galien.