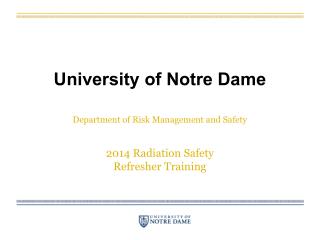 University of Notre Dame. Department of Risk Management and Safety 2014 Radiation Safety Refresher Training. INTRODUCTION. Lessons 1-5 will provide a review of some general knowledge of radiation with which all radioactive material and radiation producing machines should be familiar. Research Experiences for Teachers at Notre Dame - What is nanotechnology?. notre dame provided an opportunity to help

Navigating With The E6-B - . whiz wheels make whiz kids. written for the notre dame pilot initiative by the pilots of

Notre Dame de Paris - . description. notre dame de paris is a gothlic , roman cathedral. . when was it built? why? by