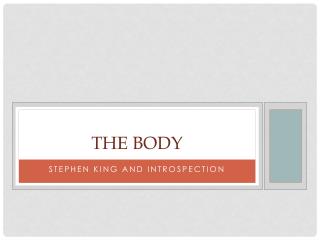 The Body. Stephen King and Introspection. What does “introspective” mean?. Author’s choices add meaning and purpose to their writing. A writer and (film) presenter’s selection of relevant topics and details strengthen the overall message. Chapter One - . the human body: an orientation. anatomy is the study of the structure of the body parts and their

Body Systems Project - . pious patel. digestive system. function. to digest food and convert it into usable forms for the

Introduction to Anatomy - . a guided tour of the human body. anatomy is the study of the structure and shape of the body

Human Body Systems - . systems homeostasis. for each system…. know the job of the whole system know the organs that

The Human Body - . organ systems – groups of organs in the body that work together to form a specific task homeostasis

Biophysical Approach - . chapter 8. what is the biophysical approach. behavior is influenced by genetic or biochemical