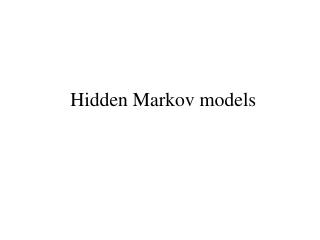 Hidden Markov models. Markov Chain. Models a sequence S=x 1 x 2 x 3 …x n in which probability of a symbol depends on its previous symbol(s). Only the transitions from and to the state A is shown. Each transistion has an associated probability. A. T. E. B. End state. C. G. Binomial Models - . dr. san-lin chung department of finance national taiwan university. in this lecture, i will cover the