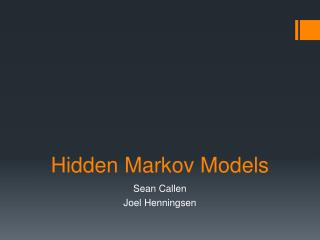 HIDDEN ACTIVE CELL PHONE DETECTOR - . introduction. the main scope of project is to sense the presence of an activated

Models of Teaching - . edtc 6341 student-centered learning. models of teaching are really…. models of learning most

Hidden Markov Model - . cs570 lecture note kaist. this lecture note was made based on the notes of prof. b.k.shin(pukyung