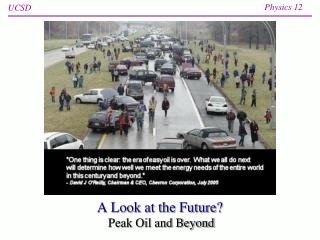 A Look at the Future?. Peak Oil and Beyond. The U.S. Lower 48 Oil Production History. Despite advanced technology and a desire to be independent of foreign oil, the production of oil in the U.S. peaked and moved to a state of decline. Q. Is anything being done?. 16 Slides On The Future Of Digital - From business insider's ignition conference 2012. "the future of business"

What Will My Future Hold? - . we learn at an early age that we should plan for our future. how many times have parents

Vision of the Future - . wilson christian academy. teach children to believe in themselves and don’t destroy the

The Future of Contraception - . the future of contraception. impact of generics review of new methods current in clinical

The future of medical journals - . richard smith editor, bmj. what i’m going to talk about. what’s wrong now with our

A Look backward and forward at the future of real estate - . jon coile champion realty. what did they get right?. office