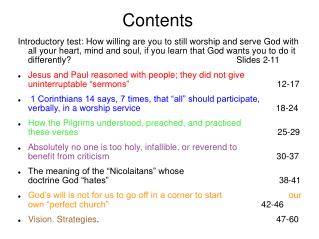 Contents. Introductory test: How willing are you to still worship and serve God with all your heart, mind and soul, if you learn that God wants you to do it differently? Slides 2-11

P 3 Contents - How to operate t his powerpoint select slideshow and click on “from beginning”. click once and this