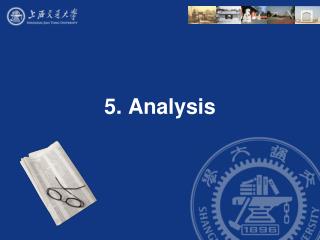 5 PRODUCTIVITY ANALYSIS - . objective of this chapter: to discuss the rationale for, functions and aspects of

Chapter 5 ORGANIC ANALYSIS - . introduction. an element is the simplest substance known and provides the building block

Chapter 5 Analysis Model - . analysis model (am). the first step in describing how the system will implement the

Chapter 5 Volumetric Analysis - . concept of volumetric analysis. the reactants will react with the standard solution