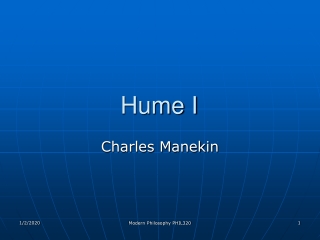 Hume I. Charles Manekin. Topics of Discussion . Life and Works On the Two Species of Philosophy Perceptions, Impressions and Ideas Empiricist Theory of Meaning Association of Ideas. Life and Works. Born in Edinburgh on April 26, 1711. Family land-owning, though not independently wealthy. Lecture 6 - . mental gymnastics to prepare to tackle hume the problem of induction as hume argues for it his question his

Hume’s “Of miracles” - . thesis: you can’t establish a religion on human testimony of miracles. he has an

David Hume’s “The Self” - . andrew rippel. intro to philosophy 110, russell marcus. hume’s dealeo with the self.