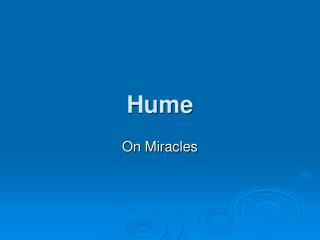 Hume. On Miracles. Hume’s two-part argument. Part I: Can there ever be sufficient evidence for a miracle? Part II: Is there any case of some event that we must suppose to be miraculous? The answer to both these questions is, according to Hume, “no”. Hume - . on miracles. hume’s two-part argument. part i: can there ever be sufficient evidence for a miracle? part

Hume - . of the standard of taste. portrait of david hume esq. career. 1711-1776, educated in edinburgh treatise of human

Hume I - . charles manekin. topics of discussion . life and works on the two species of philosophy perceptions,