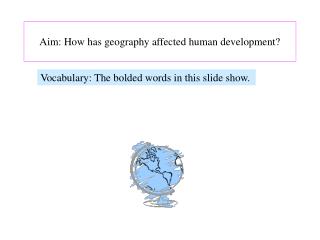 Aim: How has geography affected human development?. Vocabulary: The bolded words in this slide show. Where are we?. Room 411. How good are your geography skills?. Label : The 7 continents The 4 Oceans Human Geography People and Places - . geography and the environment help shape human cultures, but humans also use and

Introduction to Geography - . tori smith block 7. where? why?. the two main questions in geography are where? and why?.

Geography Terms - . page 4. what is geography?. geography is:. the social science that deals with the earth’s

Human Geography - . the study of how human activity affects the development of the earth. define culture…. includes

Human Geography People and Places - . geography and the environment help shape human cultures, but humans also use and

Agenda: Friday - . yesterday? human gphy- what is it intro to population ppt finish “the day after tomorrow”. human

Human Geography: Aspects of culture - . human geography. the study of people, their cultures, and their distribution

Human Geography, Vogeler - . why are you in college?. human geography, vogeler. tuition comparison with over 1,000 u.s.