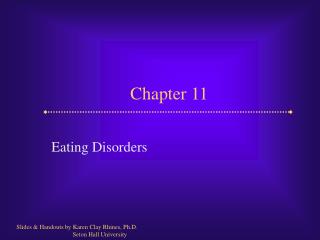 Chapter 11. Eating Disorders. Slides & Handouts by Karen Clay Rhines, Ph.D. Seton Hall University. Eating Disorders. Although not historically true, current Western beauty standards equate thinness with health and beauty There has been a rise in eating disorders in the past three decades