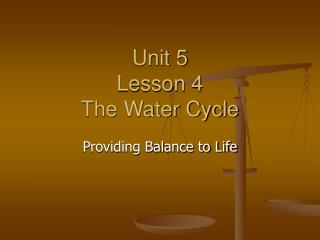 Unit 5 Lesson 4 The Water Cycle. Providing Balance to Life. What is the water cycle?. The water cycle describes the existence and movement of water on, in, and above the Earth. Earth's water is always in movement and is always changing states, from liquid to vapor to ice and back again. Today’s Agenda: Lecture I - . journal questions: describe three characteristics of water. what is the water cycle? *1.

Unit 25 - . lesson 2. connections sort it!. walt. we are learning to listen for sound patterns, utilizing unit