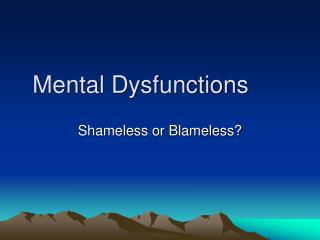 Mental Dysfunctions. Shameless or Blameless? . Neurosis. Milder than Psychosis Distortions but not a complete break from reality Typically Involve and are a Product of Depression or Defense Mechanisms. Psychosis. Psychosis is an Extreme Psychiatric State Associated, But not linked to: Homeostatic dysfunctions - . hbs3a. causes of disruption 1. 1. hormonal this involves damage or dysfunction to glands or

FEMALE SEXUAL DYSFUNCTIONS FSD - . prof. ihab younis. about 40% of women are affected by sexual problems, with a higher

Five Dysfunctions of a Team - . why are teams important? what do teams look like?. what makes teams “tick”? when can

The 5 Dysfunctions of a Team - . a webinar presented for: the nonprofit network friday november 4, 2011 presented by