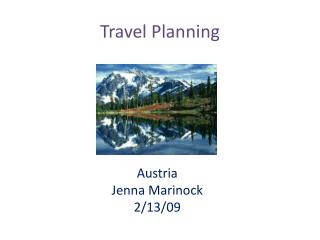 Travel Planning. Austria Jenna Marinock 2/13/09. Dates Traveled:. March 30 th to April 13 th I am planning on traveling to Austria because spring is usually a good month with flowers blooming and such. I also wanted to go during my birthday in April. Cities visited:. Travel Planning - Am shared some travel plannings kindly share to your friends..thank you

Travel Planning - . name of country your name date. what dates do you plan to travel?. what three cities or areas will

PLANNING YOUR TRAVEL - . objective: having fun. your vacation. you know you want to go somewhere and do something

Business Travel planning & Arrangements - A virtual travel assistant, as the name suggests is a person who can

Travel planning and tips - It is a guide for the traveler when planning your trip. it gives us an idea about what things

Planning to travel india - Well, we have a lot of options from where you can choose such as india wildlife, india yoga

Planning to Travel to Vietnam - Vietnam is a great place to travel on a vacation. these days getting vietnamese visa is