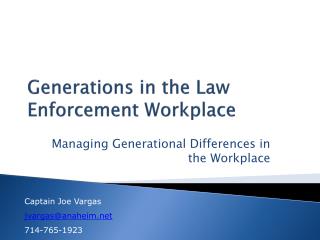 Implementing mLearning In The Workplace - Implementing mobile learning in the workplace: benefits, strategies, and

Seriously Cool: Marketing and Communicating with Diverse Generations - Our original 2008 paper on marketing to the new

H.R. 218 (Law Enforcement Officers Safety Act of 2004) - . an overview-- a snapshot of national implementation— and

Employee Drug-Free Workplace Education - . working partners for an alcohol- and drug-free workplace provided by the

generations at work: understanding and influencing (modern) - Nowhere in history have we seen 4 generation es include

Are You Smarter Than a Millennial? The challenges of generations working and learning together - . daniel phelan and

Communication in the Workplace - . ma. lourdes v. rodriguez, mba. seminar objectives:. to be able to define

The Cracker Barrel Restaurants Discrimination of Gays and Lesbians in the Workplace - . power point to accompany

Welcome to the Network Legal event - ‘To enforce of not to enforce’ - . jennifer watts network legal expert setting

Civility in the Workplace - What is workplace incivility?. behaviors with ambiguous intent to harm the target, in