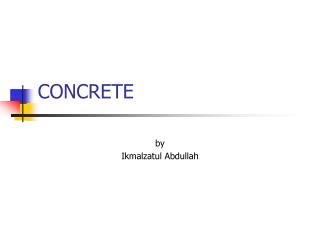 CONCRETE. by Ikmalzatul Abdullah. Introduction. A mixture of cement, water and aggregate which takes the shape of its mould and when cured at a suitable temperature and humidity, forms a solid mass. Variations in the appearance of concrete surfaces results from: Concrete - . one of the major building materials, (along with wood, steel, stone and brick), that can be used to make

CONCRETE - . by ikmalzatul abdullah. advantages of concrete:. ability to be cast - many different shapes and types of

CONCRETE - . prepared and presented by mauricio campuzano gk-12 fellow stevens institute of technology. what is it good

Concrete - . concrete. is a mixture of portland cement, water, aggregates, and in some cases, admixtures. the cement and

Concrete - . concrete houses. what is concrete made from? the answer to this question depends on what the concrete

CONCRETE - . what is concrete?. concrete i s one of the most commonly used building material s. concrete is a

Concrete - . objective: am18.01 describe characteristics of concrete ingredients. concrete is a mixture of: portland

CONCRETE - . what is concrete?. concrete i s one of the most commonly used building material s. concrete is a composite

concrete - It is all about