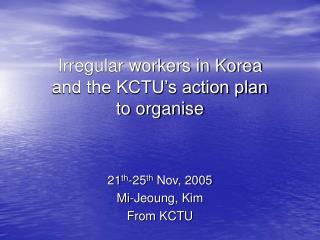 Factory workers of North Korea - Inside the pyongyang 326 electric cable

Chapter 15-16 Planning &amp; Planning Methods - . planning. deciding upon a course of action before acting. a plan is

IRREGULAR STEMS IN PRETERITE - . have two features:. 1. an irregular stem and . 2. a special set of endings: . * note

Requirements for the Cure of Cancer: Formulating a Plan of Action - . workshop sponsored by the van andel institute jan.

Welcome to Korea - Where is korea? visas american passport holders can travel in korea without a visa for a period of 30