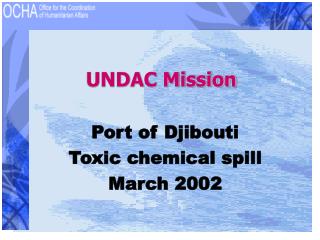 UNDAC Mission. Port of Djibouti Toxic chemical spill March 2002. Djibouti. Country bordered by Eritrea, Ethi opia and Somalia. Popula tion is approx. 500,000 The Port is the economic centre of the country, and the most important port in the Horn of Africa. The Incident.

UNDAC Development - . major needs identified from undac missions in 2004/5. need to be able to simultaneously deploy

Mission Day God’s Mission « Our Mission « Your Mission - . expectations. to identify barriers to having a more open

Mission Day God’s Mission « Our Mission « Your Mission - . what can we learn to build mission in our expanding,

God’s Mission – Our Mission - . by melanie j.s. wallschlaeger cl7521 “the missional church” doctor of ministry in

Mission on a Mission - . riding the waves of change. what happened to 2010/11?. accomplishments we completed 95% of our

Mission - Vision we want everyone in the water, sanitation and hygiene (wash) sector to access, share and use relevant

MISSION - . mission to bring a diverse group of people “under one stylish umbrella”. what sets b. smith apart?. there