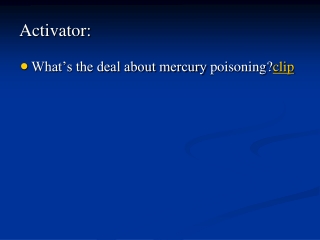 Activator:. What’s the deal about mercury poisoning? clip. Biological Magnification. What is it? Toxic pollutants enter the ecosystem that are absorbed or ingested by organisms. Some substances accumulate in organism’s tissue over time. Bioaccumulation. Schema Activator 3/10/11 - . take out the list of scenarios we reviewed last class. rank the initial behaviors in each

Activator Chapter 25 pg. 549 - . what is the difference between a rich country and a poor country in terms of average

Activator Week 5 Day 1 ELA - . what does it mean to “read between the lines?” use the reader’s journey to define

Schema Activator: - . what is this? provide as detailed of a response as possible. symbolic culture. gestures we

Activator – 10/9/09 - . work with your group to complete the pythagorean lab. answer the questions in each section. be

Unit 2 Activator - . complete the opinionnaire . you must circle your level of agreement and explain why for each item.

Week 7 Activator (Day 1) - . list the strengths of this paragraph written by someone in this

Activator Week 9 Day 1 - . explain what you think the quote below means: “when i use a word,” humpty dumpty said in

Activator: - . how would you explain the theory of pangaea to a group of first graders?. what is an ice core?. cylinder