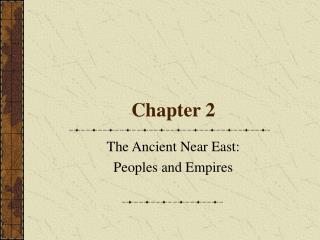 Chapter 2. The Ancient Near East: Peoples and Empires. Timeline. The Hebrews: “The Children of Israel”. Hebrew Bible – Old Testament Pentateuch Descendants of Abraham Migration to Egypt Slaves of Pharaohs Moses leads them out of Egypt (Exodus) 12 Tribes Troubles with the Philistines